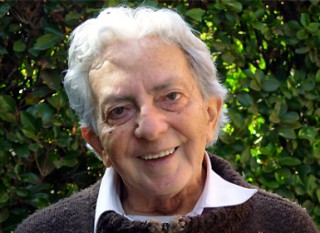 Rolando Toro Araneda (1924-2010) is the founder of Biodanza, which is now practiced throughout Europe, South America, North America, South Africa and Japan. He was nominated for the Nobel Peace Prize for his work with Biodanza.

Born in Concepcion, Chile, on 19 April 1924, Rolando followed many careers, including school teacher, medical doctor, psychiatrist, medical researcher, poet, artist, African art collector and anthropologist – all of which contributed to the development of Biodanza – his life’s work.

Rolando held numerous academic posts over the years, including Chair of Psychology of Expression at the Institute of Aesthetics of the Catholic University of Santiago, Chile.

He lived in many different countries in the course of his life, including Argentina, Brazil and Italy. In 1998 he returned to his native country of Chile, where he ‘hung his hat’ until his passing in 2010 – still dancing and travelling the world, giving his last workshop just one week before his passing. Always full of life and expression – living life overflowing and in abundance!

“Biodanza is the poetry of human encounter.
It is a system of integration of the human potential.
At the core of Biodanza is a profound respect for all life.
We are light, love, courage, beauty.
When we are with other people we don’t generally look into their hearts.
We don’t perceive the happiness, the sadness, the suffering – we seldom really look.
When we do, we realize the most precious thing that each of us is part of a totality.
That realization changes the way we live our lives.
This is the essence of Biodanza.”

Dance Your Colors, Paint Your Life >